I've just found out that Zat Knight has been transferred to Villa for £3.5m. Considering that Fulham's problems this so far this season have been in defence, I'm slightly surprised about this turn of events.
However the truth is that big Zat Knight, England international, is not actually that good. He is like the complete negative of a gestalt entity. He's big. He's strong. He's quick. He's fairly comfortable in possession. He can head a ball. He's got long legs. All these are perfect ingredients for a world class centre-half - it's just like he's been taken out of the oven too early.
Watching him as a neutral is intensely frustrating. You want him to do well and make the most out of what nature has provided. It just doesn't work out that way. His marking his awry. He can't read the game. He gets out muscled too often. His passing is pretty poor. Unfortunately, for some reason, Zat Knight is less than the sum of his parts. But that's Villa's problem now. It's probably why he scored for them last weekend.

With Brown gone before the season started and Knight somehow fitting himself through the transfer window, once again I need someone to be overly critical of in the Fulham squad. Because of his sizable transfer fee (and the fact he is unlikely to bugger off before Saturday), I think it will have to be Diomansy Kamara.
Posted by Bad Andy at 13:55 No comments:

It seems that I, along with many other football watchers, have done a disservice to David Healy. Many people thought he couldn't hack it in the top league, especially as his time at Leeds was not exactly prolific. However his tenure in Yorkshire also coincided with the club melting down a few times, which might have had some affect on the team too.
This dismissal of Healy's talents is despite his ridiculously good goals to game ratio for Northern Ireland, which we have to remember is a particularly poor national side. If Lawrie Sanchez hadn't have come to Fulham, I don't think any Premiership team would have taken a chance on Healy and as such I think at around £1m he could turn into the bargain of the close season.
Okay he's scored twice in four games (three times if you count the Middlesbrough match) but that still means he's scored more than Manchester United so far. He also scored another two last week for his country. It's not the goals that have impressed me either - it's the intelligent movement. He always seems to be moving and using his brain as a much as his physical attributes. His off the ball running has impressed me greatly and he could be a massive factor in whether FFC stay up.
The team is playing nice enough football to stay up easily, but the run of bad luck they have experienced is a bit worrying.
It's that consistent that I had a bet on Fulham to lose 2-1 at Villa. Four matches all ending 2-1 with the team that go into the lead ending up losing? I wonder what the odds are for Spurs at weekend? 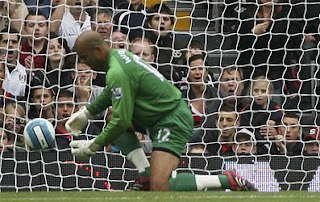 No-one else appears to be bothering posting on here just at the moment, but I'll keep the engine running.
You could tell that nothing was going to go Fulham's way in this match when the captain dislocates his kneecap while scoring even though there was no-one around him - an injury that will keep him out for 3 months!
Added to that Bouazza somehow dislocating his shoulder from a nothing challenge (which Sanchez originally told him to 'run off' from the byline), the point-blank save made by Schwarzer with his FACE from Healy, the abomination that was Mido's goal and the officials missing Healy's injury time equaliser all add up to a bad day at the office for Lawrie Sanchez's team.
The trend in each of Fulham's games this season has been a massive goalkeeping howler and the leading team end up losing 2-1. Unfortunately Fulham have been on the wrong end of both these trends twice now. Tony, Tony, Tony... you gifted Boro an equaliser. Bolton I could explain and understand with it being the wettest evening ever, but this was just crap.
On the bright side, Fulham played some wonderful football on the day and really deserved to take at least a point off Boro, with Simon Davies being particularly creative. The opposition were pretty poor to watch in comparison. Still they got the points.
A couple of interesting things happened at this match which I'd never seen before. After about five minutes the ref pulled up injured and Andy D'Urso (shudder) had to replace him. About ten minutes after that there was an announcement over the tannoy asking if there was any qualified referees in the stadium! I reckon a Boro fan said he was and acted as the fourth official, which is why Healy's goal was disallowed. I've heard of tannoy announcements for doctors, but qualified referees? What would have happened if D'Urso got injured? We'd have had the supporter of one of the sides running the line! Suspicious offside decisions ahoy.
Also during one stop for a Fulham injury where Warner had booted the ball out, Sanchez called the whole outfield team over to the dug out for an impromptu team talk, leaving the officials and the Boro players a bit non-plussed. If I was the Boro player I would have taken the throw-in to a colleague and rushed to goal while the Fulham players were still talking, get a one-on-one then purposely boot the ball wide of the net to really shit the players up. It could have seriously back-fired on Sanchez.
It remains to be seen now if McBride can be replaced by £6m Kamara, but I haven't seen a lot to suggest this could be the case yet. The away match at Villa on Saturday might answer some questions.
Posted by Bad Andy at 14:05 No comments: 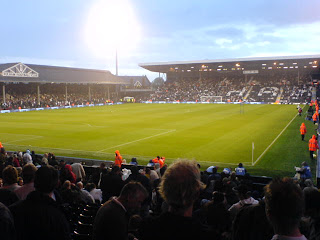 Craven Cottage was like an easy-listening Scottish band last night - Wet wet wet. A couple of friends who'd secured £5 seats in an uncovered part of the ground didn't even bother sitting there - choosing to watch from inside the stand instead. I suppose you don't mind so much if it only cost a fiver.
It wasn't the best of starts either - I was the only one sat in our bank of seats for the first ten minutes because of problems with the fancy credit card ticket turnstiles. As soon as everyone arrived, Bolton scored with Tony Warner making a bigger clanger than Jens Lehmann. None of us saw it though, as everyone was just getting settled into their new seats for the season.
A full-bodied fight back from Fulham saw them score two goals, but as they were at the other end of the pitch we didn't have the best view. Mind you, it was possible to see the deflection on Smertin's shot from space.
Considering the conditions, the quality of football was much higher than many anticipated and Fulham's backline looked particularly competent, with Bocanegra worthy of his own mention thanks to a series of last gasp blocks.
Beer's gone up to £3.50 a bottle - but I guess the club's got to recoup some money from the £299 season tickets somewhere.
The unanswered question: Why did the referee change his top from the yellow one in the first half to a green one in the second?
Posted by Bad Andy at 14:03 1 comment:

I didn't see the Arsenal v Fulham game (why have a match on a Sunday if it's not being televised? strange) but I did make sure I waited up to see David Healy's goal which my Orange mobile phone told me was scored on 0 minutes!
A debut goal with your first ever touch? And people thought that he might not be able to make the step up. Plus it had the added value of making Mad Jens Lehmann look like a complete arse (link maybe be pulled down soon).
In honour of this escapade, and the fact that most of us used to watch Healy in his PNE days, we will now introduce HEALYWATCH onto the blog to chart his progress - on the home games anyway.
Looks like there are about 15 of us going to this match tomorrow night, should be a laugh even if the football is poor. Sunday's performance is promising though.
Posted by Bad Andy at 10:29 No comments:

Q: What happens when a London-based Premiership football club offers season tickets for £299?
A: You get a lot of football tourists signing up to watch top tier football at £16 a game.

Well that's what's happened this season with Fulham. A bunch of us who support Manchester United (me), Middlesbrough, Brighton & Hove Albion, Tottenham Hotspur (apparently) and Preston North End, have all signed up to experience a league campaign from the Hammersmith End of the Grade II listed Craven Cottage. Fortunately we have an existing season ticket holder and Fulham fan to aid us.

It's odd. When the wheeze first came about, I was all excited about being a season ticket holder for the first time in 21 years. Now, with the season about to start, I'm strangely apprehensive about everything. I follow enough teams as it is: do I really need another one? How will the proper Fulham fans feel about our experiment? It is a bit patronising after all.

With the first home match on Wednesday night against Bolton, FFC have been offering season ticket holders additional seats at £5 each. It could be viewed as a good time to get a full house and persuade people to come in for the rest of the season. But it seems a bit desperate - clubs should really be able to fill their ground on the first home game of the season. Mind you Bolton and Boro aren't the two most appetizing fixtures to start off with I suppose.

Still I think that Sanchez has bought extremely well this close season and I have a feeling the team will not struggle like most papers are predicting.

Most Anticipated Player: Jimmy Bullard. 'Nuff said.
Least Favourite Player: Zat Knight. It would have been Michael Brown, but luckily he's buggered off. I guess Zat's slightly flattered to deceive in the past in my opinion.
Season prediction: League - 11th. League Cup - Quarter finals. FA Cup - Fifth Round.
Posted by Bad Andy at 17:29 No comments: