Goodwill to all men...

Well not to Chelsea, obviously. Quite excited about today's game. Anything can happen. I have a feeling that Chelsea may just nick it like they did last year, but a good battling performance will do us proud.
The away draw at Spurs was a massive improvement on last year's 5-1 drubbing, although people are still having a go at Fulham away from home - that's four goalless draws on the trot now I believe. But these have been important points - its the five away draws that are keeping Fulham out of the relegation zone. Plus a 0-0 is only one step away from a 0-1. Here's hoping for the new year.
The Spurs match also appears to have heralded the first step in the rehabilitation of Chris Baird. Castigated all last season for sub-standard performances at right back, the crowd now audibly groan when he comes on the pitch - not a good sign for a confidence player such as Baird. However he filled in for Hangeland at centre half (the first time he's played in his natural position since joining the whites) and appears to have done a sterling job. Let's hope it can continue.
Posted by Bad Andy at 11:40 3 comments:

I made the mistake of going into the Eight Bells before this match, which was awash with Man City fans. The owner of the pub is a Chelsea fan, so apparently it is a renowned away fans pub. The City fans were in good voice considering the early kick off, although there were some shameful references to 'Munichs'. They had also developed a song in Portuguese to laud the Brazilians players at City and were handing out little yellow song sheets to all the fans so they could learn it for the game. Shame that City didn't end up fielding any Brazilians after all!
Yet another game to add to the unbeaten home run. And Fulham should really have beaten Man City. They were undone early in the game by good work on the right wing by Pablo Zabaleta and Benjani managing to spring up between two defenders and easily plant a header past Mark Schwarzer. It really was simple stuff and felt a bit like a sucker punch after all Fulham's good initial play.
Fortunately the team pulled it back before half time, with seemingly want away midfielder Jimmy Bullard scoring his first league goal of the season - and what a sweet finish it was too. Reacting to a terrific pass from Bobby 'Bobatov' Zamora, Jimmy swept the ball into the far post from the side of the six yard box. A well deserved goal for a player who has gradually played himself into a bit of form.
Zamora was a pest throughout this game and really ought to have scored after latching on to a poor header back to the keeper, but headed it wide. It is not to say City didn't have their chances. Frequently Zabaleta (who I had actually met the week before) found himself in plenty of room on the right wing, but opted to cross several times. The one time he did have a shot, Schwarzer parried it out and there was chaos inside the Fulham box.
City's captain Richard Dunne, who has flattered to deceive this season after several barnstorming performances last year, was very lucky not to give away a penalty for handball - pushing away an Andy Johnson flick with his hand. It was entirely instinctive, but still handball in the area.
Shot (and save) of the day though had to be Bullard's free kick in the last ten minutes or so, which swerved and dipped several times before Joe Hart acrobatically pushed it over the bar. In the end, everyone came away more or less happy with a point.
Posted by Bad Andy at 11:50 No comments:

I've just had my complimentary 'Fultime' magazine through the post. It's really rather good. A sturdy 84 glossy pages containing interviews with Andy Johnson, Ray Lewington and Billy McKinlay.
There is also an odd 'secret santa' feature with players suggesting what they would get random other members of the squad. Aaron Hughes' predilection for Kentucky Fried Chicken should perhaps be a concern for Woy in the long run.

Looking ahead to tomorrow's game against Middlesbrough and a win would be useful. Fulham may be sat in tenth place but incredibly they are only 3 points from the drop zone. Four draws on the trot is a bit similar to a run of form from last season, but at least three of these games have been away from Craven Cottage - so what I would call a bonus three points. However with bang on penalties not given against Man City and Stoke, and the ridiculous bad luck experienced by the home team the last time Boro visited means that it is time for some decisions to go Fulham's way this weekend.
Posted by Bad Andy at 13:22 No comments: 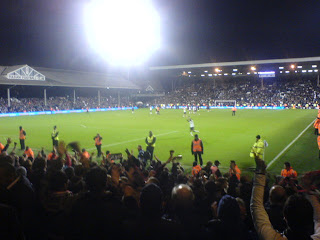 Now this was satisfying, wasn't it? A suddenly resurgent, Redknapp-led Spurs side brought plummeting back down to earth with a bump with the realisation that they are not as good as they think they've become.
Granted, the home side were dealt a huge slice of luck wit the mistake by Heurelho Gormless, but its not as if the keeper's erratic performances hadn't warned the Spurs manager that his number 1 isn't exactly to be trusted 100%.
In fact when the goal went in, I was convinced that Johnson had got a touch. There was no way that Simon Davies soft cross had gone in, had it? The length of time it took the ball to leave Davies' boot and end up in the back of the Tottenham net made it feel as if there were two acts to the goal. Still the replays at half-time gave us much succour. This poor keeper was going to be playing right in front of us for the next 45 minutes! Excellent fun.
Poor Gomes got berated with chants of 'Dodgy Keeper' and 'there's only one Gomes' for the whole of the second half. The Hammersmith End was even giving it the old 'whoooooooooooAAAAH! You're shit ahhhhhhh....' so I was in my element.
Sat next to me was one of Col's mates who came to the Wigan match. However he was sat with us as a Spurs fan, and kept accidentally cheering on his side. So he didn't like it when Johnson turned in a header from Dempsey to make it 2-0 and I danced.
All through the game Fulham were on top. Comfortable even. And I just couldn't relax knowing there was only a one-goal cushion, so the second goal going in saw a great release of tension. It turned out the second goal was necessary as well because Spurs scored against the run of play, loanee Frazer Campbell slotting in from inside the penalty box.
In truth the scoreline was a fair reflection on the game - it could have been even better if Gomes hadn't pulled off a cracking save from a sublime Bullard free kick near the end of the match. In terms of excitement, it had nothing on last season's 3-all draw, but in terms of performance it was head and shoulders above it. I even managed to capture mad Johnny Pantsil doing a lap of honour on my camera.
Posted by Bad Andy at 15:17 1 comment: 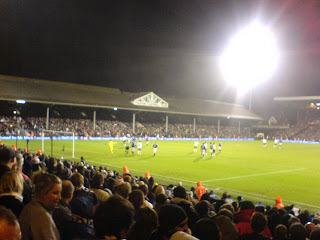 Again another improvement on last year's corresponding match. I was fortunate enough to miss the last minute penalty which decided the result last year, but this season's award was right in front of us.
It is Andy Johnson's first penalty win for Fulham and, unlike those won during his previous justified diving reputation, was a bang on penalty. What the referee missed though, but the whole of the Hammersmith End witnessed, was the sneaky shove in the back that AJ had given to another defender outside the box before he was chopped down within.
Both sides had slices of luck - in the first half Johnson pounced after a Cacapa clearance hit the back of a fellow defender in a dangerous position, while in the second Shola Ameobi prodded in a goal from an offside position (not that we could tell at the time back in the Hammy End). But once again Fulham were good value for their victory and Murphy's penalty was a justified winner.
This was one of the matches where I became very conscious of the important holding up role that Bobby Zamora plays. It's a shame that he can't really add goals to that kind of performance. He would possibly score a few more if we employed proper wingers making regular crosses, but with the team winning I doubt Bobby Z (or to give him his nickname of Bobatov) actually cares that much.
Posted by Bad Andy at 12:53 No comments:

Whoa, whoa. I'm way behind here. This was a good win against an improving Wigan side - although to be fair the Latics were never really in it.
AJ's first goals for the club were really well taken, the first in particular, and it looks like the wee slaphead has broken the trend of nearly all the goals being scored in front of the Putney End.
His second goal was quick thinking at its best, with Bullard's speedy free kick meeting a speedy AJ run behind the back line and a neat finish at the far post.
It is also marked the start of Jimmy Bullard starting to play well again, although he was mostly awful in this game again. The assist seemed to spark the potential again and got him in the right mind set. He couldn't buy a goal though, despite seemingly having more shots than anyone else in the league.
The one let off for Fulham in this game was Scharner heading over Schwarzer's bar in the 45th minute when someone of his aerial ability really ought to have scored. We were also amazed to see Woy Hodgson actually making some substitutions. Three of them as well! Overall it was a much more impressive performance than the 1-1 draw against the same opposition last year.
Johnny Pantsil is continuing to woo the Fulham fans, if not with his match performances then his eccentric behaviour around games. From his prayer stance before the match, to his map of honour after the games - he is winning a lot of people over than he wouldn't have been able to manage with his play alone.
Posted by Bad Andy at 15:27 No comments: