'It's a strange table', Lawrie Sanchez says, and he's not wrong. Last week's draw with Derby saw the Cottagers rise up five places to 13th - an absolutely ridiculous position more than a third of the way into the season for a team that has only won once. Can you imagine a team winning only four games all season yet being five places from the drop zone at the end of the season? Unlikely.
It's an odd season already - Chelsea aren't even in the European places - and Sanchez is perhaps lucky that several other teams have stalled as well.
Fulham have gone from the sublime to the ridiculous though - the free scoring, free conceding team has now reverted to a toothless attacking force but which can usually stifle the other team. The worrying thing is that Sanchez seems as perplexed as we are. I know which one I would prefer to watch.
For all the goals I have seen Fulham score this season, none stick in the mind as coming from particularly good interplay between the front two, and sometimes three, strikers. There doesn't appear to be any idea over what the best combination is either, although Sanchez seems to think that Healey and Kamara cannot play together and just interchanges them. I'm less impressed with Kamara - he needs to pull his finger out. You can only live off a last minute, overhead kick equaliser against close North London rivals for so long.
I'm also worried about the lack of character the team seems to have, Spurs match aside. When the team needs a leader, all 11 players seem to turn into a Madeleine McCann suspect - completely faceless.
I get the feeling that Fulham have played most of the weaker sides without picking up enough points and by Christmas will likely be in the drop zone. The team are starting to look like they did on Easter Monday under Chris Coleman - already down. If they don't pick up a couple of wins in the next few matches, Al Fayed will be under pressure to get rid of Sanchez and start again.
Hopefully it will all start turning around in the next few weeks, but I won;t be around to see it. I'm heading down under for an Australian holiday for a couple of weeks. Toodle pip.
Posted by Bad Andy at 00:27 No comments:

In all my years of going to football, I can only remember attending one goalless game before - a Champions League game - the first match of Man United's defence of the trophy which was a home game against Croatia Zagreb. There have probably been more, but I just don't remember them. I hope I don't remember this one.
A turgid first half display by both Fulham and, in my opinion, referee Phil Dowd was compounded by the injury time sending off of Paul Konchesky. However as I had been so disillusioned by the match to this point I had already gone to the Riverside Bar for what was actually a cracking pint. We heard the boos that greeted the dismissal, but were not minded to find out what was going on.
When the second half started, I was slightly confused that Seol Ki-Hyeon was replaced for a defender. While Ki-Hyeon himself was next to useless on the pitch, I felt sure Simon Davies would replace him, not Bocanegra. Mind you, the match got more exciting after the change and Fulham actually looked threatening for the first time. In fact the game became rather open, a fact that would have made more sense had I counted the number of people wearing a white shirt. In my defence, three other people with me also didn't realise.
Fulham did well with 10 players and had their chances to win the game, although not as many as Derby. The midfield looked like it needed a general to boss the game; the team is lacking a leader at the moment. It's a shame, as I would have liked to have seen Derby stuffed thanks to a general dislike of the little gobshite Billy Davies, who has rubbed my up the wrong way ever since he left Preston North End in a non too gracious fashion.
Not beating teams like Derby at home suggests Fulham will struggle this season and one win from 10 games demonstrates this. How Fulham current sit at 13th in the table with 8 points is extremely surprising, but they are only one point from the drop zone. In that context, this draw might be quite valuable in the scheme of things, but if the team don't win a game soon the crowd will be calling for Sanchez's blood.
Posted by Bad Andy at 07:25 No comments: 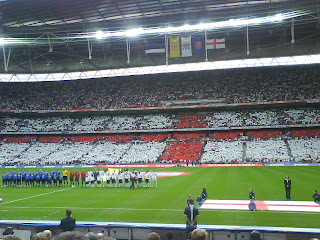 I went to Wembley last Saturday on a work jolly, despite the fact that it meant missing the Scotland v Ukraine match. The match was quite entertaining, especially in the first half, so I was somewhat surprised to find a real negative reaction to the game and performance.
I was also surprised to hear Frank Lampard booed when he came on as sub. As I have also heard the Fulham fans booing twice this season already, it seems that it is an accepted way of showing slight displeasure these days.
When I first started watching football, booing your own team was the absolute worse thing the fans could do. It would frequently be the last thing a manager heard before being handed his P45. Now it seems booing is somewhat a matter of course.
I was sat in the Club Wembley seats, rather near the pitch. In fact I could see the 'bench' along my row. It was strange sitting in a cushioned seat at the football - it was like being at the cinema. The seat immediately in front even had one of those pouches you get on car seats for you to put your programme in. The only other place I've seen cushioned seats in Arsenal's Emirate's Stadium. These nouveau stadia!
While I was watching the game, I was also receiving text updates on the Scotland match, so occasionally I was standing up and punching the air, while all those around me had no idea what I was doing. My father would be proud.
Posted by Bad Andy at 08:13 No comments: 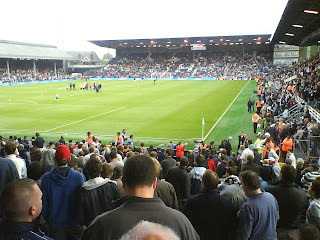 I guess this is the game where I realised that the experiment really wasn't working. Despite this being the fifth match I've seen with Fulham this season, I really couldn't get upset by the fact that they lost. I recognised the seeming injustice - Fulham had three really good chances to score just before half time only to be defeated by two deflected goals - but it really was not engaging like previous games had been.
The injudicious defeat against Boro had kept me involved until the end, with the team pushing on and scoring a disallowed, perfectly legal goal in injury time which Chris Kamara is currently lionising on YouTube, but this just fell flat from the second goal.
Perhaps its because I was distracted because Ben & Claire were due to show up just after half time and I was keeping an eye on my phone to make sure I could get tickets out to them. Perhaps it was because Fulham didn't look like scoring. Perhaps it's because I was full of a cold. Perhaps it's because I didn't care.
I think my sojourn to the away end has almost had a cauterising effect on me from Fulham's plight and that gap needs to heal again. It would help if they were competitive throughout the match though. Unlike the legend that is Jimmy Hill (pictured in the corner), Fulham didn't come out for the second half and it cost them.
Again, I'm surprised at the almost willingness for the fans to start booing Fulham if things don't go their way. The team's been a bit unlucky this season and if they don't rectify this soon it may become a habit. But who the hell do the fans think they are watching? This was a team that began the Millennium in the lower leagues. Without a support actually supporting them, it could soon find its way back there.
Posted by Bad Andy at 23:42 No comments:

An even stranger 'fan' 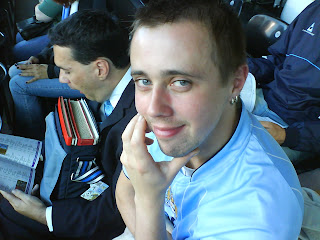 It's been a while since I posted. I've been ridiculously busy, which meant I missed the Bolton Carling Cup match (good move) and even had to turn down a free ticket to the Chelsea away match (bad move).
Anyway, I was looking back at some of my photos from the City match when I was sat in the away end and very uncomfortable and I came across this photograph that I felt I wanted to share it. It may look like a photograph of my wee mate Peter, but you'd be wrong. It's actually a photo of the guy next to him - the strangest football spectator I have ever seen at a match.
He never moved from his seat. He kept his rather full bag on his lap. He was dressed quite smartly considering it was a Saturday. He was not moved by anything that happened on the pitch. Considering this was a rip roaring 3-3 draw, that takes some doing.
I don't think he was even watching the football. Throughout the game he was reading 'Lighthouse' a magazine for stamp collectors. He left with about 20 minutes left. The City fan on the other side said he could understand the guy's behaviour if it was the previous season. "We'd be asking him to pass it around," he joked.
I have yet to come up a plausible reason as to why he was there, especially as it was £30 a ticket. My theory is that he still lives at home with his mother and she, being doollally, has bought him a ticket because that's what all the young kids are doing these days. And he's gone under sufferance. This doesn't tally with him being in the away end though. Maybe he gets sexual gratification from being among a noisy crowd? I'd love to find out his story. I would have asked him, but you kinda got the feeling he'd roll on the floor in a ball and scream if anyone noticed him.
Posted by Bad Andy at 19:44 No comments: